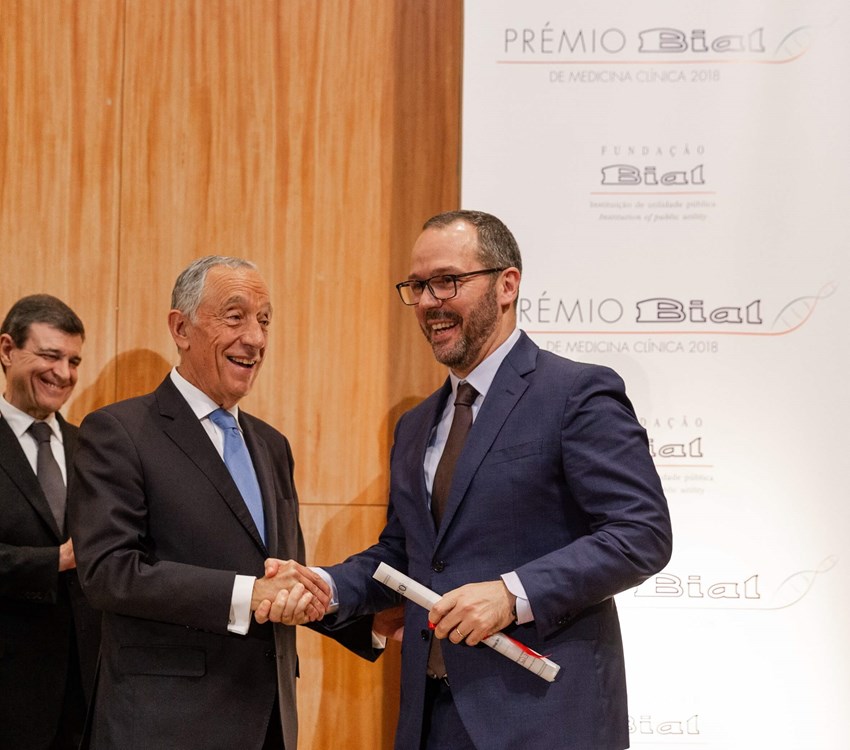 BIAL FOUNDATION AWARDS CLINICAL RESEARCH ON GASTRIC CANCER IN PORTUGAL WITH A €100,000 PRIZE

Mário Dinis-Ribeiro wins the 2018 BIAL Award in Biomedicine
Commendations for research in Familial Hypercholesterolemia and Obsessive Compulsive Disorder
Mário Dinis-Ribeiro, Head of the Gastroenterology Service at the Portuguese Institute of Oncology of Porto and full professor at the College of Medicine of the University of Porto, won the 2018 BIAL Award in Biomedicine with the following study “Cancro Gástrico em Portugal - Como reduzir a mortalidade por cancro gástrico em Portugal” (Gastric Cancer in Portugal - How to reduce gastric cancer mortality in Portugal).
The award-winning study followed, between 2005 and 2017, approx. 400 patients with malignant or premalignant gastric lesions. The approach used by Dinis-Ribeiro made it possible to define new guidelines for the detection and treatment of gastric cancer, one of the deadliest in Portugal, mainly due to late diagnosis and its high lethality. The performance of endoscopies enabled the removal of lesions in a minimally invasive manner, with a success rate (complication-free) of 80 to 85%. Among the patients included in the sample, the mortality rate was only 1% and never due to complications related to gastric cancer.
Mário Dinis-Ribeiro highlights the role of endoscopy in the early detection of gastric cancer or cancer precursor lesions, which can replace surgery in many cases. Recommendations inherent to the main risk factors associated with gastric cancer are also explained in this paper: Helicobacter pylori infection and wrong dietary habits, as well as the intake of high amounts of salt and tobacco smoking.Mário Dinis-Ribeiro explains, “The results allow us to draw two types of conclusions and approaches to prevent and treat gastric cancer. First, at the prevention level, it is very important to alert the population to risk factors such as tobacco smoking and salt intake. Secondly, if we want to reduce the prevalence of gastric cancer, we must focus on the early treatment of lesions through upper endoscopy and prevent them from evolving.”
The President of the European Society of Gastrointestinal Endoscopy and President of the Portuguese Society of Digestive Endoscopy highlights “The recommendation for gastric cancer screening must be a consideration of foremost importance, and according to the cost-effective ratio analysis, we advise patients to undergo an endoscopy procedure, simultaneously with colonoscopy. When the patient is screened for colorectal cancer, they should undergo endoscopy and thus be also screened for gastric cancer”.
Currently, the only recommended screening for the digestive tract is colorectal cancer from the age of 50. Mário Dinis-Ribeiro concludes with a call to “The role of healthcare decision makers in considering gastric adenocarcinoma in the health agenda of Portugal”.

Approximately one in sixty people suffer from gastric cancer in Portugal. It is estimated that by 2035, the number of new cases and deaths in Europe will have a 30% growth rate. Portugal presents the same trend, with an increase from the current 3,018 to 4,082 cases and from 2,285 to 3,172 deaths. In less than 20 years, gastric cancer will be the cause of death of nine Portuguese nationals on a daily basis.

The president of the jury of the 2018 BIAL Award in Biomedicine, Sobrinho Simões, emphasizes, “The relevance of the results obtained by the award-winning research and its implications in national and international guidelines for gastric cancer approach. This research is of great impact, regarding a type of a cancer that is not viewed as a problem in Europe but has a frightening mortality rate. These results demonstrate the cost-effectiveness of upper endoscopy in early detection and, consequently, in the treatment of lesions. It is worth noting that this is a minimally invasive treatment, compared to the traditional surgical intervention. It demonstrates the importance of biomedicine research and how it can be decisive factor in the pursuit of better treatment solutions for patients. This also includes a better allocation of financial resources.”
The 2018 BIAL Award in Biomedicine jury also conferred two commendations worth €10,000.

COMMENDATIONS
The team led by Mafalda Bourbon, Coordinator of the Research and Development Unit of the Department of Health Promotion of Noncommunicable Diseases of the Instituto Nacional de Saúde Doutor Ricardo Jorge, earned a commendation for their study, " Translational Medicine in Familial Hypercholesterolaemia: from phenotype to genotype”.
In Portugal, over 50% of the population has cholesterol levels above those recommended by the European Society of Cardiology. However, 20,000 to 40,000 Portuguese nationals have nearly twice the recommended values since birth because they have an alteration in a gene responsible for cholesterol clearance from the blood. This gene mutation gives rise to a very high risk of premature cardiovascular disease. This condition is called Familial Hypercholesterolaemia (FH) and is considered one of the most common genetic pathologies associated with increased cardiovascular risk. It is estimated that approx. 15 million to 30 million individuals suffer from FH in the world. Of these individuals, less than 1% of cases have been identified.

The Portuguese Study of Familial Hypercholesterolemia (EPHF) was established at the Instituto Nacional de Saúde Doutor Ricardo Jorge aimed at implementing the molecular study of FH in Portugal. A network of 121 physicians from 59 public and private hospitals and clinics has been established for referral of patients with FH over the past 20 years. As of August 2018, 2,819 patients from 942 families were referred, including 395 children.
The study has improved patient counselling and proper treatment, leading to better adherence to therapy and a better prognosis. The authors point out that the correct diagnosis in a child is particularly relevant in deciding the age for drug therapy start, because the sooner it is treated, the better the prospects of preventing the onset of cardiovascular disease in adulthood.

The second commendation was bestowed to the study “Neurosciences of OCD (NoOCD): Towards a Brain Based Clinical” by Óscar Gonçalves, neuropsychologist and clinical psychologist, full professor at the College of Psychology, University of Minho, and Ana Castro Fernandes, psychiatrist from CUF-Porto Hospital.

This project sought answers to improve the treatment of patients with Obsessive Compulsive Disorder. A disease that affects 4% of the Portuguese population is one of the most disabling mental illnesses, where patients are stricken by disturbing thoughts and ideas (illness, contamination, accidents) which they try to control through repetitive behaviours and thoughts (cleanliness, organisation and diverse rituals). In the most severe cases, the patient presents high levels of anxiety and symptoms that take up much of their daily lives, strongly interfering with their work, family and social life.
The medical community still has a very limited therapeutic response to this disorder, including pharmacological intervention and psychotherapy. The study of Óscar Gonçalves and Ana Castro Fernandes showed that this condition is associated with a much more extensive variety of brain alterations than previously thought, allowing for a better characterisation of the disease and a treatment focused on altered neuropsychological processes.