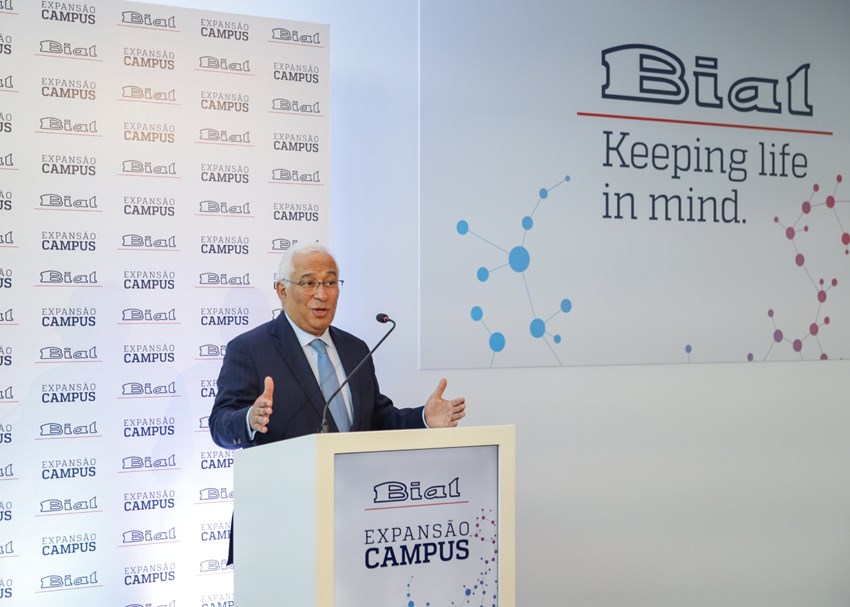 Trofa, 28 October 2022 - Prime Minister António Costa unveiled a new antibiotics production unit and the expansion of the industrial building of the BIAL group this morning. These two new facilities are part of the expansion project of the BIAL Campus, installed in an area of over 24 hectares and involving an investment of 30 million euros.

Together with the investment being made in the logistics area, the new antibiotics unit and the expansion of the industrial area will allow the company to strengthen its production capacity and autonomy in the supply of medicines for the various markets in which it operates.

With an area of more than 10,000 m2, the investment in the industrial building meets the specific needs of international markets such as that of North American market (USA and Canada), where medicine is packaged in pill bottles instead of the traditional European blisters. The new BIAL facilities include an automatic pill bottle packaging line with a capacity to package an average of 3,000 bottles/hour. BIAL is now able to produce and package in Portugal the two medicines it researches itself (for epilepsy and Parkinson's disease) and which it markets through local partners in the United States, a market which represented 21% of the company's turnover in 2021.

The expansion of the BIAL Campus also includes a new antibiotics production unit, whose construction began in the middle of the pandemic in May 2021, and which constitutes a fully autonomous unit with production, quality control and warehouse infrastructure.

According to António Portela, CEO of BIAL, the unit "will respond to the demands and specificities inherent to the manufacture of antibiotics. BIAL is reinforcing its installed capacity in the critical strategic area of the production of antibiotics in Europe. If necessary, it now has the capacity to provide annual production equivalent to the consumption of the most widely used antibiotic in Portugal".

BIAL's new antibiotic plant has the capacity to double production from 1.5 million blister and pill bottle packs to 3 million. The company estimates that 50% of production will be destined to supply external markets.

"With the reinforcement of production capacity, these investments reflect our strong industrial commitment to the country. Portugal is the base, the centre of the company's operations, both at an industrial level and in terms of research. We are exporting the medicines we produce and our innovative technology to patients all over the world. We are exponentially increasing our industrial capacity, fulfilling an ambition to progressively reindustrialise Portugal and Europe," says António Portela.

With this new infrastructure, BIAL now has an installed production capacity of 750 million capsules/pills and of 3 million packages of antibiotics.

As part of the BIAL Campus expansion project, the logistics area has also been an area of investment in the order of six million euros, with its conclusion scheduled for the first quarter of 2023.